How it all started:

Jim Kerr is the host of the Rock and Roll Morning Show on Q104.3 in New York, a show I listen to every morning. Unknown to me, at the time, was that his birthday was coming up soon and a chain of events would lead me to make him a birthday present. Our company has been working on a different project being constructed for a customer in New Rochelle, NY it is a 5' x 10' O gauge layout built with a New York City theme. The buildings all have window signs in them, so I made one window with the Q104.3 logo and guitar images. It is the corner window at the on the right corner of the intersection in the picture below: 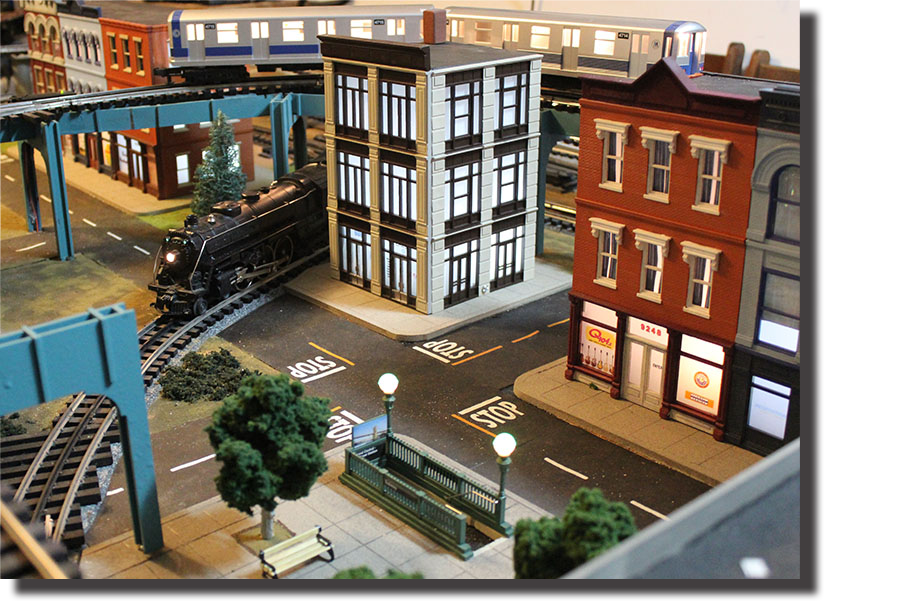 I sent this image by email to the show's co-host Shelli Sonstein asking her to show Jim. I did know, from listening to the show, that Jim likes trains. Shelli responded asking if we could make something like this for Jim's birthday, a small shelve exhibit. I suggested a 12" x 24" diorama in N Scale with a city scene and an elevated track. Then Shelli told me the required date, December 9th! That gave me less than 4 weeks to do the job, even less because I needed to complete and deliver the New Rochelle project on November 22nd. So in reality I had less time and some work will have to be done simultaneously.

To stay on schedule I decided to use some buildings that were left over from other projects. One complete corner building with sidewalks and people and two semi complete buildings. In addition we would get a Woodland Scenics Built-&-Ready® building to complete the street scene. I usually do not use factory complete buildings but on this tight schedule I needed to. The Woodland Scenics building are painted and detailed well so they would be right, with minor alterations, for the diorama.

Shelli agreed to all my ideas and then added some of her own. I informed her that I would send her pictures of the project as I finish certain mile stones. Some of the pictures are in the rest of the article. 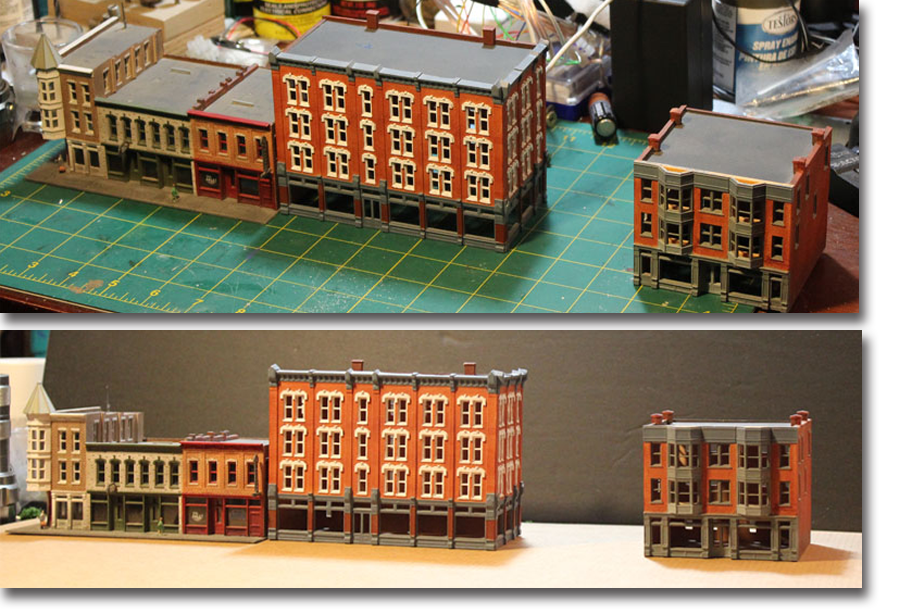 At this point I realized that I am creating something special. This is not just any diorama, this project needs to be all about one person. So I came up with some ideas to make it work. There would be several building walls painted with the radio station logo (decals), I would create a billboard with Jim and Shelli advertising their radio show and the station to go on top of one of the buildings and the store windows will reflect places related to Jim.

As I started to collect more information about Jim from Shelli and Joe (the radio show's producer), I realized that this diorama would need some kind of action. There would be no moving elements because of the size and schedule so I came up with the idea to have comic strip balloons, with conversations about Jim the show and the station above the people throughout the diorama. Not sure if it would work I first tried it out, I needed a comic strip font that would be readable at a small size that didn't over-power the scene. I also needed to mount the balloons to look like they are suspended in mid air. The image below was my first try, it was OK for now so I sent it to Shelli to see if she liked the idea. She did. I added the penny to demonstrate the actual size. 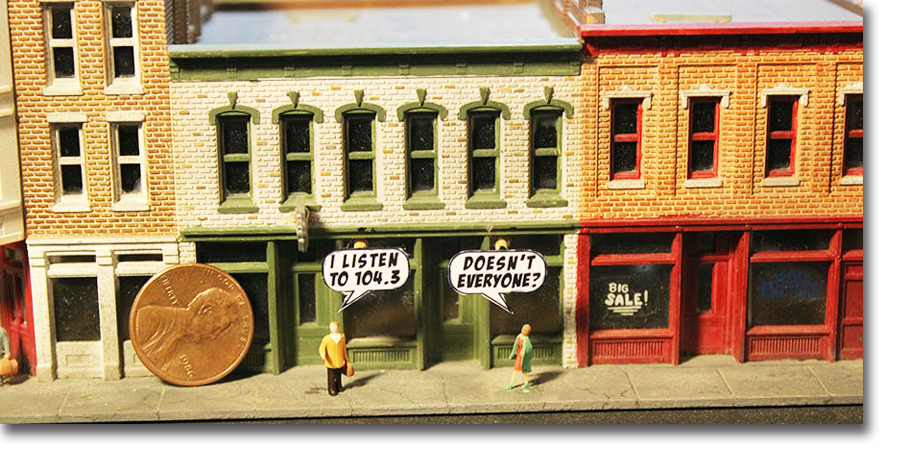 The elevated track came next. I have not done N scale work in some time so I wasn't familiar with what was available, that is where the Internet came in to play. I searched for a kit and found a beautiful elevated track system from ITLA Scale Models in Canada. The kit was very detailed and I was not sure I would be able to get it done on schedule. Nick at ITLA assured me that it would be easy so I decided to get it, not knowing that Murphy's Law was about to kick in.

At this point I started working on the windows for building #2. The top windows will all have drapes and the store windows will feature storefronts that relate to Jim, Barnes and Noble, Q104.3 (the radio station), Banana Republic, Quick Check (one of the main advertisers on the show) and my office (DG Design). I quickly realized that the buildings must be lighted, this will make the signs very visible and enhance the entire look of the diorama.

I needed more info about Jim for building #3. Shelli and Joe came up with a restaurant in Manhattan called Elaine's where Jim was a frequent guest. The restaurant has a very unique yellow awning and signs. I decided that it would be perfect for building #3.

Here are some images of the completed building #2:

November 20th, Where is the Elevated Kit

The elevated track kit was scheduled to arrive today, it is a no-show. In any case I will be busy installing the 5' x 10' layout in New Rochelle over this weekend. Jim's diorama will continue on November 23rd.

Murphy's law in full swing. The elevated kit still hasn't arrived so I checked with the US Postal Service for its location. Turns out the kit is stuck in Chicago in US customs and, as explained to me by the postal agent, it is not up to them to release it, it could be in a bin with some suspicious package and wouldn't be released until the issue is resolved. Murphy strikes again. So for now all I can do is continue with the rest of the work and wait.

When informed that the elevated kit is a no show Nick at ITLA sent me another kit scheduled to arrive on the 30th. Just hope it is easy to put together and paint in time. For now building #3 is almost ready. The yellow awning is in place and the window has the Elaine's logo with a busy interior printed on it. Next to Elaine's I put a store front for Madison Hardware, a New York landmark for Lionel trains in the 50's, 60's and beyond. On the left wall of the building I added the Q104.3 logo. Elaine's sign will be added later.

Building #4 is the Woodland Scenics Ready Made building. It will be modified to have lighting and on the right wall I added the Q104.3 logo, later I will add an old beat-up Beatles poster.

November 27th, Laying out the Streets and Park

The next step is to start putting everything together on the surface. The foreground will be a park, this creates interest and allows an unobstructed view of the buildings and the dialog balloons. The elevated track will be behind the buildings, I know the actual size but I always like to place the real objects to see if I am getting the overall effect I am looking for. As the elevated set has not arrived yet I will have to estimate and adjust later. I also decided to go with fall colored trees, they just look better. The sidewalks have been cut and are ready for a paint job. I added to the park a circular area with three park benches and people sitting on them. The idea came from the park that is across the street from the radio station where Jim works.

I have been working on the ground cover for the park, painting the street markings and the sidewalks when, finally, the elevated kit arrives and I can start putting it together. The elevated system is comprised of 4 kits that join together. First I assembled one set to get an idea of how complex or not it was to build and also to decide on what parts need to be kept apart for painting. I was glad to find out that the kit is relatively easy to assemble. Placing the section on the surface gave me an idea on how the whole elevated track would look and what paint scene would work the best. 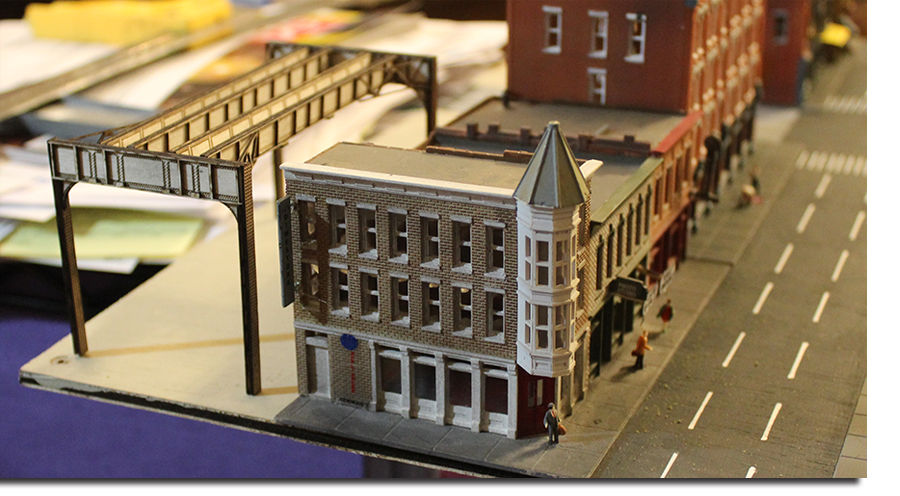 To make the elevated track look right I realized that it must be built very accurately and straight. So I put together a jig to assembled the rest of the kits inside.

Once complete it is time to see how the whole assembly and passenger car would look on the diorama. I used one car for now but the plan is to have three cars with operating lights. I also needed to decide on which track the cars would be. The back track looked like the right decision because it allows for additional color contrasts and interest with an exposed track in front.

Last step is to paint the elevated track, wire the track for power and affix the cars to the track. Obviously model train cars are not supposed to be glued to the track, but this diorama does not feature a moving train and it needs to movable without the need to reassemble any part of it. After doing several tests I settled on using Gorilla Super Glue. I powered the tack to make sure the cars all light up then I moved them, one at a time, slightly in one direction. Next I put a drop of glue in the spot where the wheels will be once moved back. (only on one pair of wheels in each truck) I then moved the car into place making sure the lights were still working. Once dry and secured I did the same for the other two cars. 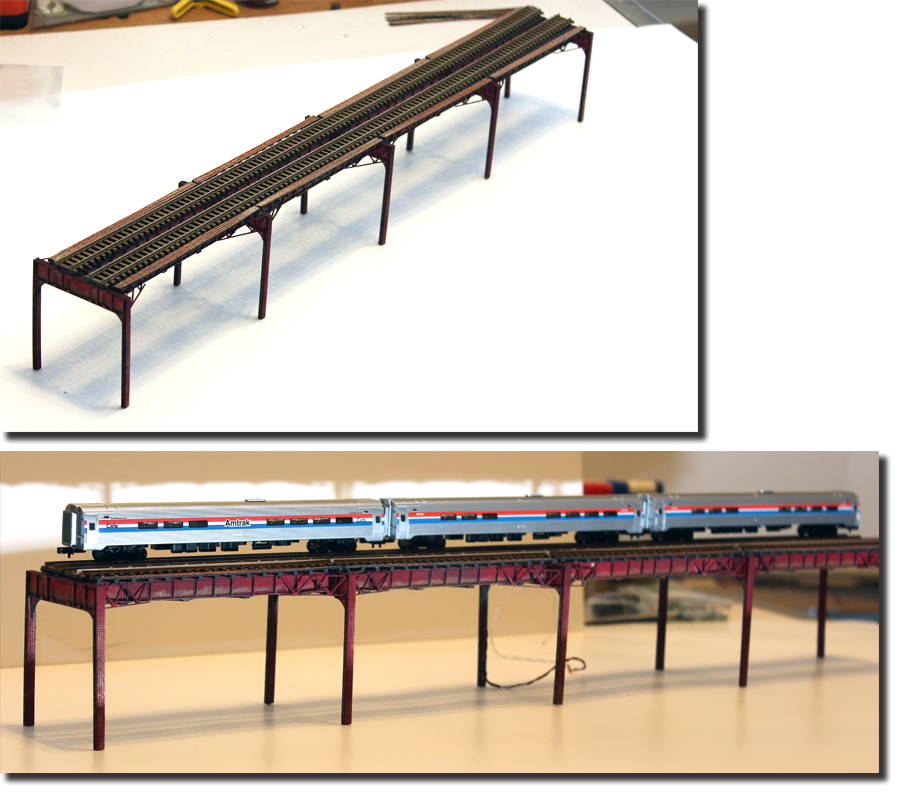 While the glue and paint was drying on the elevated system I built the base for the diorama. I had two options, to use factory finished molding or plain wood molding that I would have to stain and coat myself. The second option would take more time but the result, in my opinion would be better.

For the lighting I used the Woodland Scenics Just Plug™ Lighting System. Each building is lit by one LED light, the windows are treated with a diffusing film and the control box is placed under the surface, it is accessible by tilting the diorama so the light levels can be adjusted. The passenger cars are draw current from the track that is connected directly to a 9 volt source. 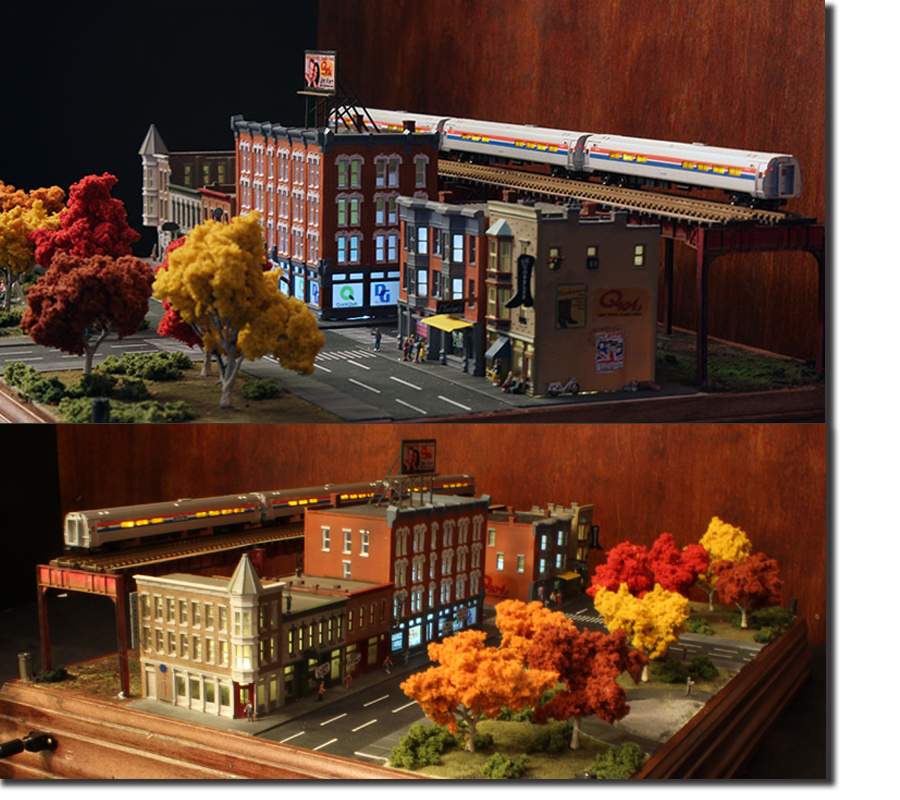 The comic strip dialog balloons needed two fixes. First the font needed to be changed to a more readable font and the balloons needed a better mounting system to hold them in place and be as invisible as possible. After some testing with the actual text I decided on the font and for the holders I used brown coffee stirrers cut in half and attached at an angle for the balloons by the buildings and for the balloons in the park I used circular clear rims of plastic cups. The mounts are affixed at a 45 degree angle to make them invisible from most viewing angles.

The diorama is now complete: 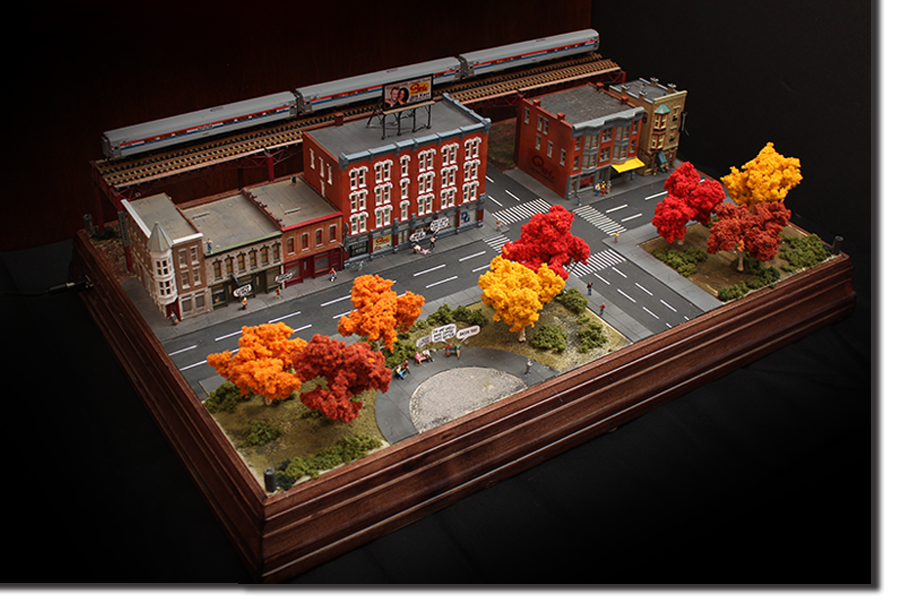 The plastic cover was assembled from acrylic sheets and held in place with four screws in rubber tubes that are painted with Grimy Black paint. The cover is removable. The last step is to have brass plates made with Jim's name, radio station name and year. 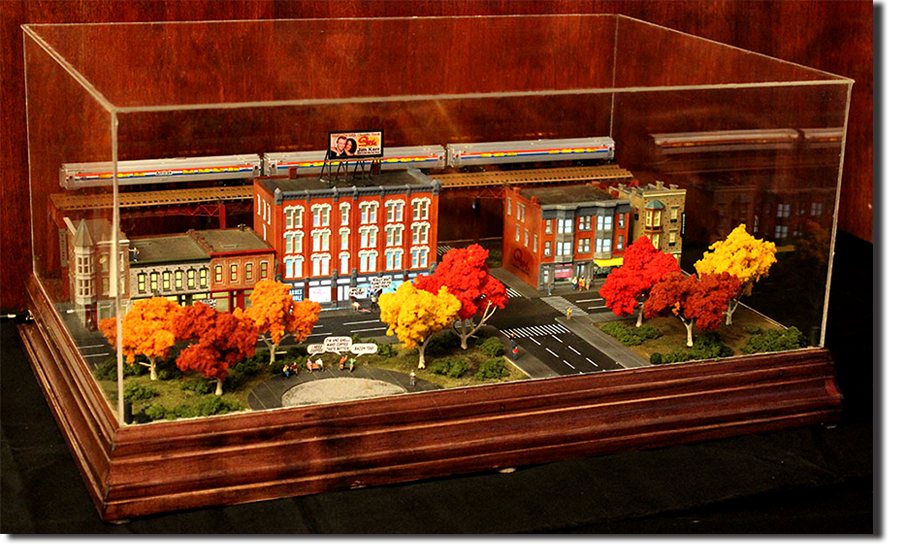 Shelli's plan was to have Jim unwrap the gift on the air, live. So I needed to wrap the diorama in a way that would be easy to open, no hint to its contents and give Jim something to talk about. Here is how the the wrapped diorama looked: 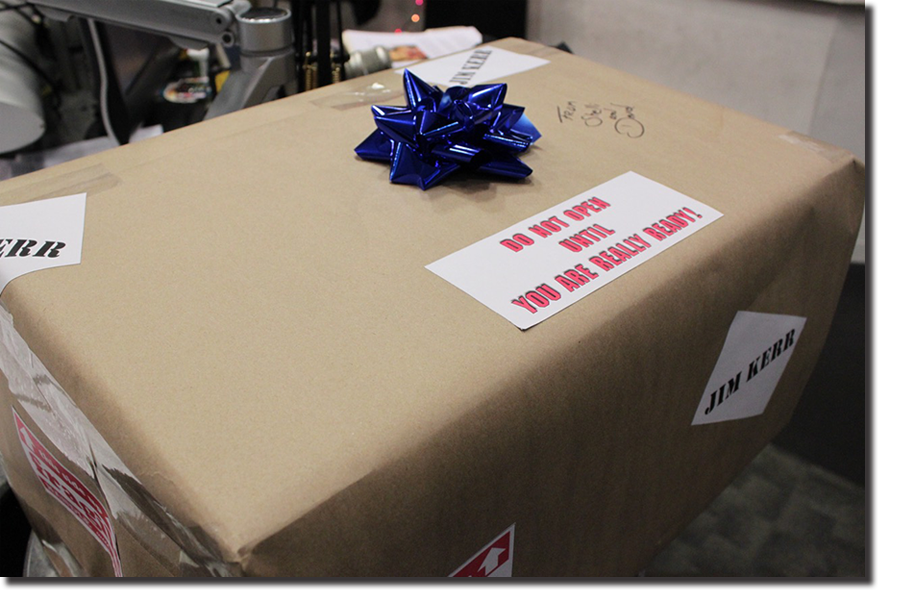 And this was the opening sequence, which included a commercial break where Jim is leaning on the diorama still wondering what it is: 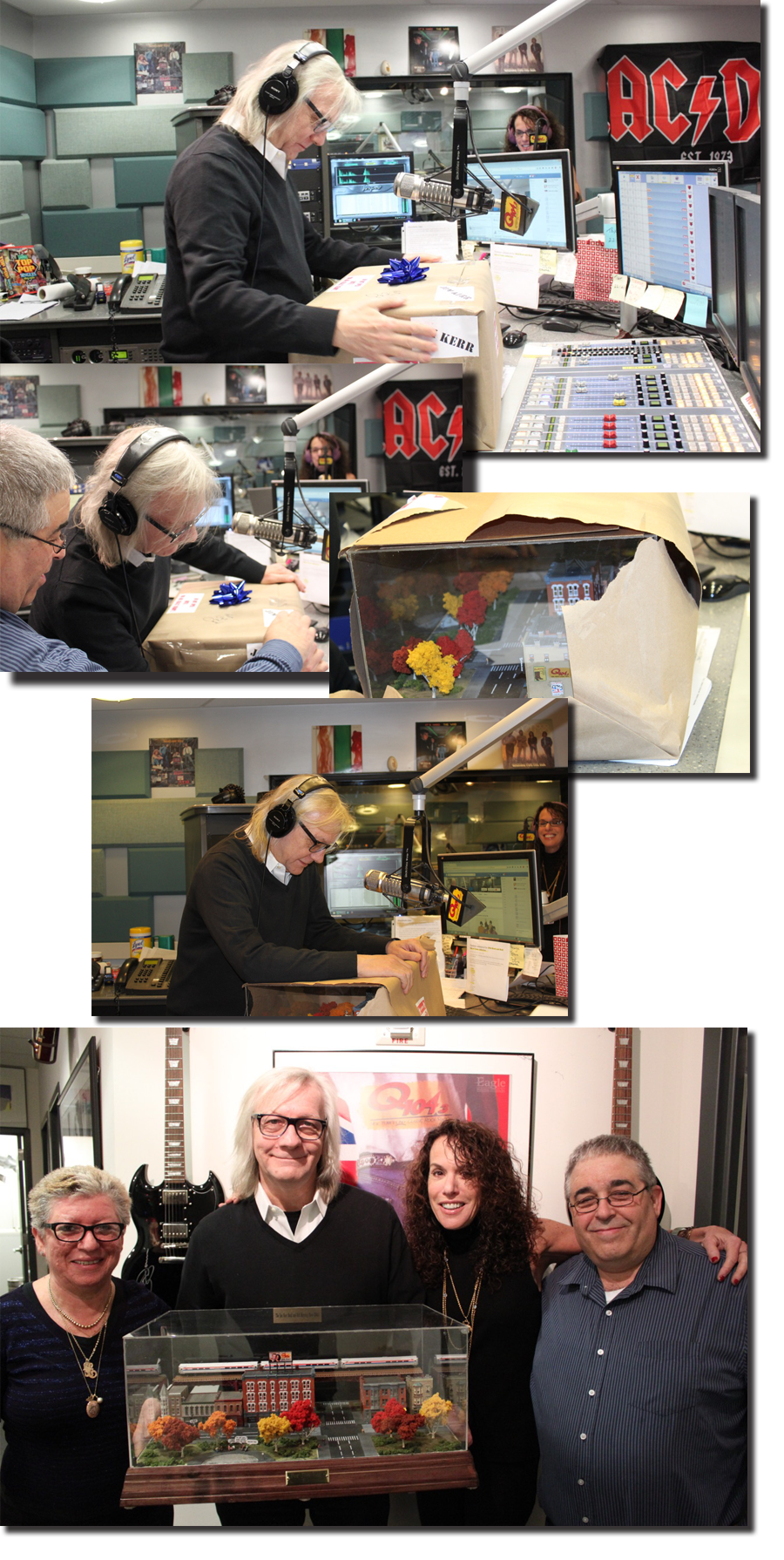 From left to right: Etty Geyra (my wife), Jim Kerr, Shelli Sonstein and me (David Geyra).